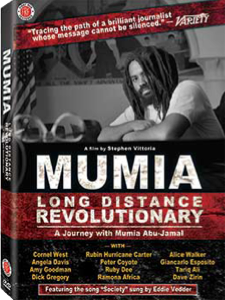 Manufacturing Guilt, the new short film from Stephen Vittoria, producer and director of MUMIA: Long Distance Revolutionary, takes on the colossus of Abu-Jamal's contentious case, distilling a mountain of evidence and years of oft-repeated falsehoods to the most fundamental elements of police and prosecutorial misconduct that illustrate a clear and conscious effort to frame Mumia Abu-Jamal for the murder of patrolman Daniel Faulkner. Based on the actual record of investigations and court filings from 1995 to 2003 - evidence denied by the courts and ignored in the press - Manufacturing Guilt cuts through the years of absurdities and overt racism to produce a clear picture of how Abu-Jamal's guilt was manufactured and his innocence suppressed beginning only moments after he and Faulkner were found shot in the early morning hours of December 9th, 1981. This historic and courageous film is the perfect companion to Long Distance Revolutionary - a film that is unequivocal in its force regarding Abu-Jamal's innocence.

What others are saying:

“Wow, masterful work. This piece broaches new ground in a number of areas (inclusive of fleshing out Giordano).
It is easily absorbed by the uninitiated and illuminating to those 'N-Da-Know.'
It includes visualized documentation to prove the frame job Abu-Jamal continues to endure.”
– Journalist and Professor Linn Washington

“’Manufacturing Guilt’ highlights truth. Everybody who has a heart for justice,
passion for truth, and concern for the innocent should see this film.”
– Keith Cook (Mumia’s eldest brother)

“Manufacturing Guilt is a chilling and vital inside view of what happened to my beloved father Mumia Abu-Jamal
on that forsaken night that forever changed his life—and ours."
– Jamal Hart (Mumia’s oldest son)

“There’s a reason I’m called by some ‘long distance.’ In part it’s because the state went quite a way to convict me, to sentence me to death. In a case such as this innocence is irrelevant, and to quote Judge Sabo, “Justice is just an emotional feeling.”  St. Augustine said, what is a political regime when devoid of justice but organized crime...

Steve’s film shows such a system where false confessions are used, where witnesses lie, and false evidence gets introduced to get a false conviction before a judge who boasts, ‘I’m going to help them fry the nigger.’

Welcome to Philadelphia you all...

From imprisoned nation, this is Mumia Abu-Jamal.”